PA0RJV’s set-up PCB for DATV on a RaspberryPi using UglyDATV from Evariste F5OEO. 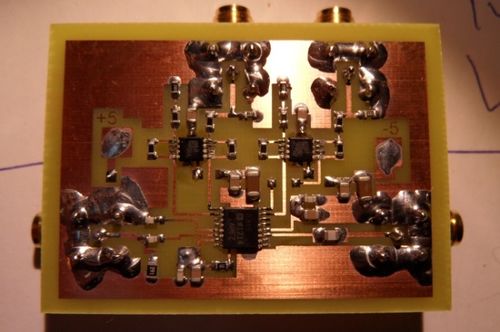 On this small PCB I and Q signals from GNU radio and Local oscilator were used as input. The output came direct from the IQ-modulator chip without any amplification.

After this setup a more sophisticated setup was made in order to have more proper impedance from a PC's soundcard. 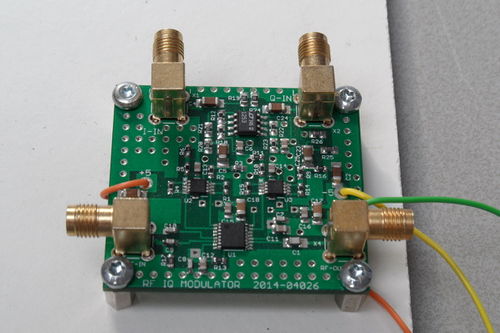 In basic, this setup is identical to the previous PCB, but a dual low noise impedance buffer OP-AMP was placed in between the sound-card output and the both I and Q inputs.

Start of testing with Digilite and later UglyDATV.

After Evariste’s UglyDATV was there, existing pcb’s were modified to fit on an RaspberryPi. 2014/2015 Early setup experiments: 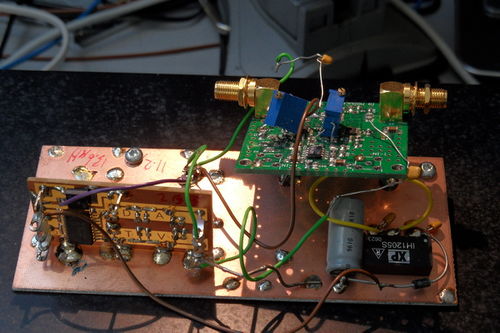 On this picture you find a combination of the I/Q modulator connected to a nyquist filter as used in DIGILITE This setup was used in combination with Digilite's I/Q output.

We were happy with these results so a new PCB was made: 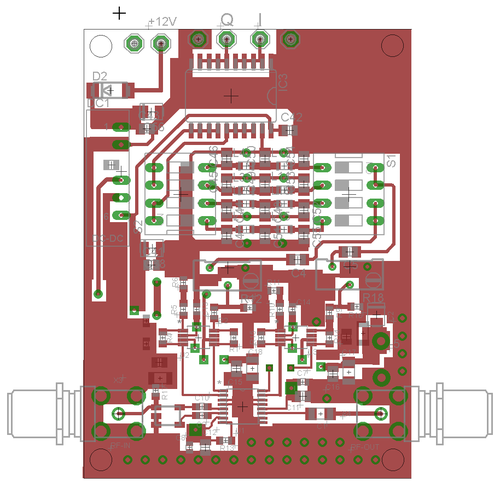 And here this test PCB: 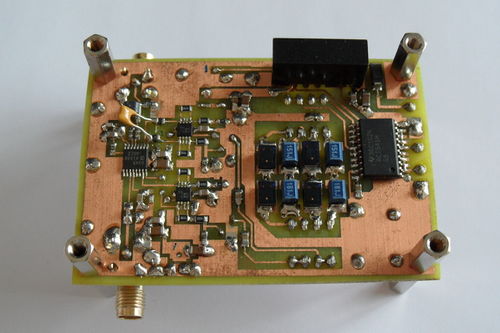 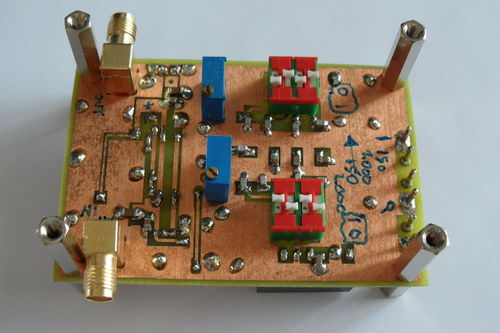 This is the bottom side of the PCB with dip switches to chance SR-filter settings. The two multi-turn trimmer potmeters are used to get the proper constellation set-point.

For Nyquist filter calculations the free software Elsie from Tonne software was used.

We are working on a user selectable wide-band I/Q SR-filter, but on this 2015 DATV set-up PCB the present Nyquist filter works OK for this moment.

Tests have been made using additional LC filtering but we kept to the 'old' Digilite idea, not 'state of the art' but OK for us HAM's ! 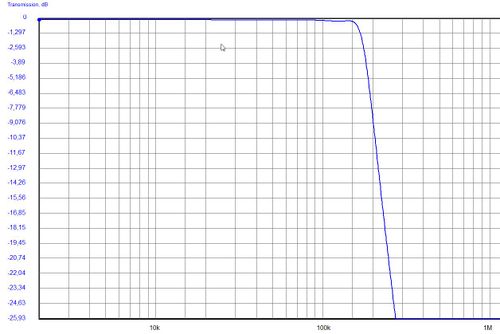 The used filter has 100 Ohm input and output impedance.

In the previous (test) PCB no additional buffer OP-AMP was used.

It was more difficult te get a proper setpoint fot the DATV constellation.

In the present setup of te DATV PCB a proper fast and low noise opamp is used for both I and Q channels.

Connections are made to the Raspberry-Pi GPIO bus on the left. Internally the Pi works at 3,3 Volt.

Input buffering and shifting to 5 Volt is made so a proper Nyquist filtering could be made with 100 Ohm input and output impedance.

After the I and Q Nyquist filtering two fast low-noise pre-amps were used as buffer to give the I and Q differential op-amps their proper input levels.

Finally differential I and Q signals are connected to the IQ modulator chip.

An RF input a level of -6dBm is used. Both top and bottom side of the PCB are used. The PCB is powered from 12 Volt only. 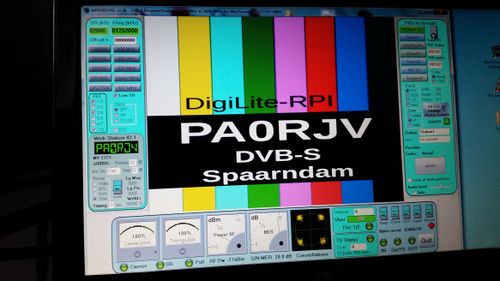 A nice MER in the test setup.

There is a protective diode against polarity mistake. Furthermore the negative voltage for op-amps comes from a DC/DC converter on the PCB..

Thanks to Tutioune and UglyDATV we now have a great working DATV system.

Tests in the Netherlands show that distances of over 10 km. is possible with < 20 mW. Furthermore tests were made on 437 MHz with a Symbol-rate of 250.

After a initial higher RF power level the level could be changed up to 4 mW. We are talking of a distance of 15 kilometer with a path over a large town.

Also links to nearby ATV/DATV repeater(s) in the Netherlands are working fine.

These results after a proper connection is made and power level is lowered for that test.

The present DATV setup PCB to be connected with a RaspberryPi using Evariste's UglyDATV: 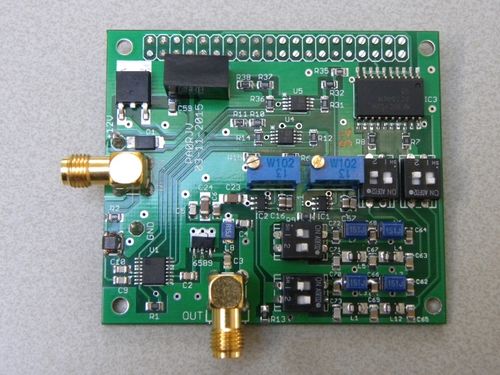 the top of the present pcb. 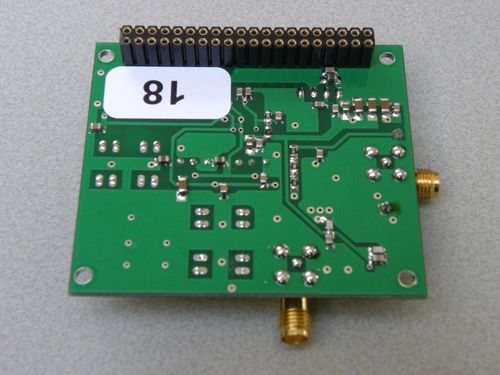 the bottom of the present pcb.

And the overview of the combination in my combined 70 & 23 cm DATV transmitter system. 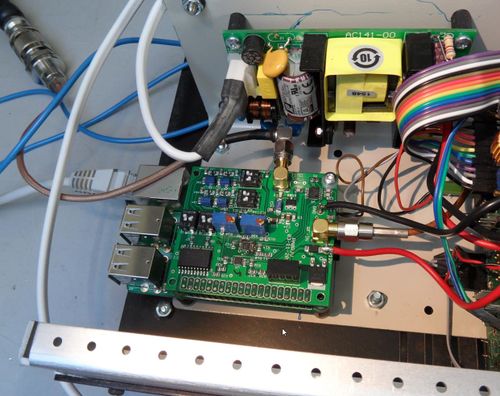 Here a RaspberryPi connected with the DATV setup PCB.

Local oscillator input: the approx. -6 dBm RF level is connected into a wide band balun on the PCB.

In 2014 a nice design was made for a nice working local oscillator. (see under un text the aditional information)

Joop PE2JKO made a nice controller and software with the following functionality:

But now we are some years later, on E-bay or AliExpress you can buy ready-made PLL oscillators on a PCB round 35 $. [[1]]

You need to make your own controller, or you can buy a PLL oscillator in connection with an LCD display /control PCB and make even that a simple combination.

(by pushing the touch-screen you can set your desired frequency)

Hard to compete. But another proper RF signal could also be used!

Here the local oscillator pcb. See also the detailled info on this site with info from Joop PE2JKO.

Visit the PG540 site with usefull info about Joop's approach of DATV interfacing.[2]

And more aditional info about past local oscillator and future idea's.[3]

(at present only in Dutch language, but we will fix that in a later stage !)

It is essential to use a proper band-pass filter behind this DATV- PCB. When you use some extra amplification filtering can be placed behind the final AMP. But a good idea to have also some extra filtering before your RF-PA.

Starting your own DATV station:

How to get the above described DATV setup-PCB : You can order a ready-made PCB, tested, aligned and with an individual test-report by me.

The price for this DATV setup PCB is 125€ and can be paid using PAYPAL the price is including the approx. 5€ PayPal costs. Payment to my IBAN account is 120€ because of no PayPal costs then !

Shipment costs depending of the destination. In EU mostly 13€ and in NL 7,50€. When you have questions please contact me by e-mail.